It was my dad’s birthday the other week and we were lucky enough that he and my mom were still visiting so we were able to share in his birthday celebrations.  My aunty Christine made her famous roly poly for pudding – this version was minus the raisins which I know quite a few of my fellow bloggers will appreciate.  The recipe is super easy and super versatile – you can swap out the apples for pears; you can add nuts or cherries, ginger and mixed spice.  Enjoy it on it’s own or serve it with custard, cream or ice cream. 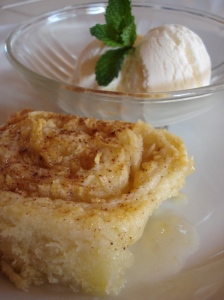