Pete has whisked me off to Swaziland for a little getaway so I will be a little scarce for a short while. 🙂

To quote Wikipedia:  “Portulacaria afra (known as elephant bush, dwarf jade plant, porkbush and spekboom in Afrikaans) is a small-leaved succulent plant found in South Africa.  It is a soft-wooded, semi-evergreen upright shrub or small tree, usually 2.5–4.5 metres (8–15 ft) tall.  In the wilds of South Africa, large plants do survive the winter frosts by growing dense enough to provide their own natural cover. Drought-tolerant and fire-resistant, it will endure desert sun and heat once established. Cuttings root very easily in most potting media.  In southern Africa it is commonly eaten, usually as one component of a salad or a soup.”

Must remember to use the leaves in a salad next summer

And to quote The Spekboom Foundationan: “Spekboom has enormous carbon-storing capabilities. Its capacity to offset harmful carbon emissions is compared to that of moist, subtropical forest. This remarkable plant is unique in that it stores solar energy to photosynthesise at night. This makes spekboom thicket 10 times more effective per hectare at carbon fixing than any tropical rain forest. Each hectare of spekboom could capture 4,2 tons of carbon yearly.”  How cool is this plant!

“The miracle plant of the twenty-first century: Stef Delport The Spekboom (Portulacaria Afra) is truly the miracle plant of the Eastern Cape and the Sundays River Valley. The Addo Elephant National Park is privileged to be the centre of the Spekboom region. The Valley Bushveld Biome (Xerix Succulent Thicket), of which The Spekboom certainly forms the main part, occurs mainly in the Eastern Cape’s river valleys of the Gamtoos, Sundays, Fish and their surrounding areas.

The Xhosa name for the Spekboom is iGwanitsha and in English it is known by the descriptive name of Elephant’s Food (and not as the Pork Bush according to the wrong direct translation from Afrikaans) as it forms up to 80% of the diet of elephants. An elephant eats up to 200kg of Spekboom leaves per day.

During this process they can strip almost all the leaves off the tree, but the tree very soon sprouts new growth. The broken or down-trodden branches also develop new roots and grow again as part of the thicket. Thus Spekboom flourishes if it is grazed upon, trodden and fertilised from the top. The destruction of large areas of Spekboom in the Eastern Cape was actually the result of over-grazing these bushes by grass and bush herbivores such as goats and sheep, which stripped them from the bottom and, in this doing, destroyed the Spekboom and the micro-climate under their protective thickets. The eyesore this resulted in is clearly visible for all to see on many farms. The Spekboom is a herbaceous shrub and the only specie in its genus and restricted to the south-eastern regions of South Africa. The Spekboom prefers summer rainfall with warm summers and a temperate winter climate. The occurrence of large numbers of Africa’s big game in this area can be mainly attributed to the presence of the Spekboom. An interesting fact is that in the Spekboom regions of the Eastern Cape, virtually no large anthills of termites are found. North of the Kei River the tropical termites occur, while the temperate region termites are found south of the Eastern Cape Spekboom region. 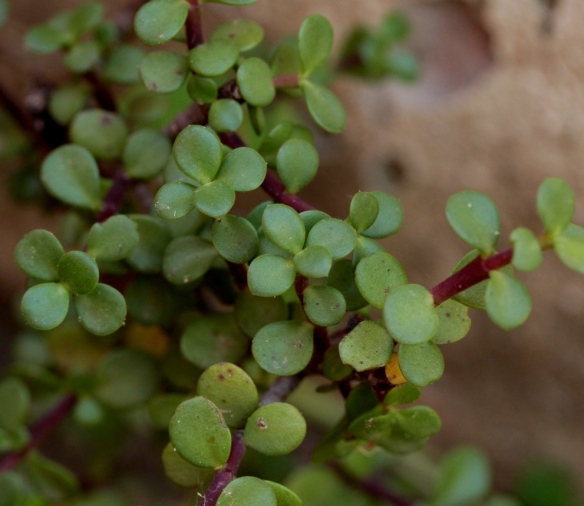 The first Europeans to penetrate this part of the Eastern Cape were hunters who came to the Sundays River Valley as early as 1702. Thus, fifty years after the arrival of Jan van Riebeeck in the Cape, this Valley was already known for its elephants, thanks to the abundance of the Spekboom. The Spekboom was known in Europe at an early stage.

In 1771 the well-known botanist, Linnaus, reported that one was flowering in Italy and when the French Revolution started in 1786, another was flowering in Vienna. Early travellers through southern Africa noted the occurence of Spekboom. In 1834 Thomas Pringle wrote in his African Sketches: “The Spekboom, with its light green leaves and lilac blossoms” ….. and later he refers to…” browsing on the succulent Spekboom, which clothed the skirts of the hills.”

In the Cape of Good Hope Almanac of 1843 we find: “One of the most valuable shrubs … is the Spekboom (Portulacaria Afra). It is found in great abundance on the stony ridges and affords excellent food for those large flocks of sheep and goats…. In severe drought the bush is truly invaluable.”

Today the Spekboom supports the tourism industry of the Eastern Cape with its many game farms, nature parks and the Big Five which are being reintroduced to their old natural habitat everywhere. Today, an ever increasing number of farmers are moving away from veld-destroying goat and sheep farming to sustainable game farming.

The Spekboom flourishes in areas with an annual rainfall of 250 to 375 mm and warm summers. It reaches heights of 2,5m to 4,5m with a trunk which averages 20cm in diameter and can live up to 200 years. It has succulent green leaves of 1,3 to 2mm long. These are stubby or rounded and are joined by a small stem. It flowers in spring or early summer after good rains and has pink or light purple hermaphroditic flowers which produce good honey.

The fruit is small, berry-like, pink and transparent with 3 small wings and need follow-up rain soon after the fruit drop to germinate.

The Spekboom is exceptional as it uses 2 two methods of photosynthesis:

1. During the winter months when it is cool and damp, ordinary photosynthesis and better growth occur.

2. In dry conditions, winter or summer, a process is activated whereby the plant opens its stomata and ‘inhales’ carbon dioxide and builds up acid inside the plant. During the night the stomata are closed and the acids are broken down to release carbon dioxide inside the plant without losing moisture through its stomata. The available moisture is then stored by means of these carbon compounds in the leaves, stems and roots of the Spekboom.

Thus the Spekboom is an exceptional plant as it can utilize both these processes. These facts have been established thanks to the physiological studies by scientists in especially America and Japan.

In the 1960’s and 1970’s scientists realised that the Spekboom functions differently to other plants.

The Spekboom is even more special as its humus cannot burn. Thus a fire cannot destroy it and its organic material, as well as the carbon dioxide taken from the air, is finally stored in the ground. Studies done in the veld show that an average patch of Spekboom can capture up to 4 tons of carbon per year.

Global warming will eventually have catastrophic consequences for mankind.

One of the reasons is that carbon dioxide is building up in the atmosphere and this causes global warming. The Kyoto Protocol endeavours to halt this process by, among others, creating Carbon Sinks which will remove large quantities of carbon from the atmosphere in a natural way. Research has proved a Xerix Succelent Thicket and especially Spekboom in the Valley Bushveld to be one of the most successful Carbon Sinks in the world. A Spekboom can remove up to 100 times more carbon from the atmosphere than a pine tree of similar size can do. This type of Bushveld only occurs in South Africa, Mexico and Spain, but has been virtually destroyed in the latter countries. The Spekboom is thus going to cause a mind-boggling revolution in farming in the Eastern Cape. Millions should eventually be available to pay farmers to have the Spekboom veld restored by decreasing their livestock or planting Spekboom. At present projects are afoot to replant hectares in the vicinity of the Sundays River and Baviaanskloof with Spekboom. So, perhaps, in future, farmers will use the Spekboom to farm with carbon.

Nowadays trading is already taking place with Carbon Debits and Carbon Credits. Countries such as Germany and others which signed the Kyoto Protocol, are assessed and penalised with Carbon Debits because of their excessive pollution of the atmosphere as a result of the high

CO2 emissions of their vehicles and factories. They then have to buy Carbon Credits to neutralise their outstanding debits.

Farmers in the Eastern Cape who participate in this system and who have their carbon deposit evaluated by German certifiers, will be able to trade their carbon credits on the open open market. Sums of anything from $1 to

$600 per hectare, depending on the density of the Spekboom area, have been mentioned. So farmers will be able to sit on the stoep having coffee, while their Spekboom bring in the money.

Another fact contributing to the Spekbooms reputation is its ability to stimulate milk production. The traditional Xhosas believed that the grandmother should start eating lots of Spekboom leaves a month before her first daughter would give birth. A few days after the birth of a daughter, the baby was handed to the grandmother to suckle so that the young mother would be available to fetch wood and water as the grandmother aged. I mentioned this once to experts on grazing of the University of the Free State and they could confirm that research showed that the milk production increased considerably when cows grazed on Spekboom.

Spekboom is the staple diet of bush grazers such as kudu and other big game.

It is also digestible by herbivores like cattle, providing it is consumed with other available plants suitable for fodder. Thus it is an exceptional habitat for game as it not only provides food when grass and smaller bushes are no longer edible in the dry winters, but also serves as shelter during bitterly cold weather because of the moisture in the Spekboom which maintains some of its heat at night and thus acts as a good insulator.

Spekboom also differs from other bush shrub as it is edible for people. The leaves, which have a slight lemony taste, are suitable to use in salads.

The Spekboom is rich in manganese, cobalt and especially magnesium. It also contains large quantities of the micro elements, iodine and selenium.

Millipedes use concentrated iodine as a defensive mechanism and this explains the presence of large numbers of these in the Eastern Cape Valley bush. This also sheds light on the movement of thousands of millipedes across the tar road near Uitenhage, where dense areas of Spekboom occur next to the road.

People have been planting Spekboom as hedges over hundreds of years.

Spekboom branches take root quickly and start growing when put into the ground. By merely planting branches in the ground close to one another, one can create a living hedge which is ideal to enclose one’s property. Black stock farmers have used these over centuries as fences for a kraal. The stock could then maintain the inside of the kraal by grazing on the leaves and protruding growths, while the outside could grow freely.

We hope the symbiosis of people, big game and the Spekboom will lead to fruitful ecological and economic co-existence in the Eastern Cape in future.